Benefits of exercise during pregnancy

Exercising during pregnancy isn’t only good for you: Just one hour of moderate activity a week can boost your baby’s brain development, finds a new study from the University of Montreal.

Researchers recruited 18 pregnant women in their first trimesters and asked half to exercise a minimum of 20 minutes, three times per week, while the other half remained sedentary during pregnancy. The researchers then measured the newborn babies’ ability to discriminate

sounds—the basis  of learning to understand language—eight to 12 days after birth. They found that the children of women who exercised had a more mature response, indicating their brain development was given a head start in the womb, says study author Élise Labonté-LeMoyne, a doctoral candidate at the University of Montreal.

Previous studies have shown that exercise can improve brain function in adults, due largely to an increase in blood flow to the entire body, including the brain. The researchers think the impact on babies could be the same, just passed on from their mothers’ actions. A future study will test the babies’ cognitive, motor, and language development at age one to see if the improvements in brain function are maintained. 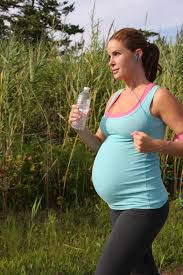 If you’re nervous about exercising during pregnancy, don’t be. No risks have been found in studies, even when pregnant women participate in sports like marathon running, says Labonté-LeMoyne. “I do generally recommend regularity rather than intensity,” she says. “A 20-minute brisk walk every day is better than a two hour hike on the weekend.”

It’s best, of course, to avoid sports with risks of injury or where a ball or other equipment could hit you in the stomach, Labonté-LeMoyne warns. Other than that, she recommends continuing activities you did before pregnancy. Water sports, like swimming or water aerobics, have an added advantage of increased blood return.

Excuses women use to not exercise when pregnant