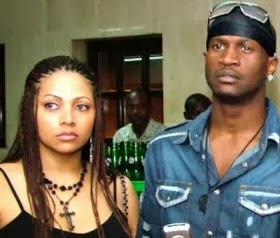 Genevieve magazine December edition featured Peter and Lola Okoye on the cover and their amazing story! Reading this will help you understand better why Peter places Lola above all….It’s pure love from Lola

“After we had scaled the hurdle and became friends, I kept preventing her from coming to my house because everyone called her boss.From her wristwatch and everything, I would be like.”CHEI! This person no be my level”
One day, I took ill and I guess she tried to reach me but I wasn’t picking up. She then called brother who told her I was ill. To my horror she then came over to my house. To be honest with you, I was so ashamed that after she left, I wanted to know who invited her to my house”That person don buy my trouble”.

I remember living in a small room which my brother and I shared.Our bed was a mattress on the floor. The wardrobe had clothes overflowing to the floor and the room was littered with unwashed plates and half drunk pure water nylons. I was lying down as a broken fan did its best to circulate the air and she walked in and said hello.I felt as if I was dreaming. The picture of five boys sharing a two-room apartment was definitely an eye sore. I didn’t know where to look when she came in.She just tip-toed to where I was and looked at the environment then called her driver and asked him to come into the compound.
“She picked two shirts and asked me where I kept my underwear.I didn’t want her to go there so I told her they were washed and drying outside .She helped me get into her car and took me to her house. I remember sleeping in her arms as we drove through thick traffic. Although I wasn’t really ill by this time, I pretended  to be very ill especially as I saw the layout of pounded yam and Egusi with goat meat,
Food over, she gave me some medication and I stayed at her place for three days and kept pretending to be ill because I din’t know how to go back to my house.
Infact it was the first time in my life I was sleeping in a room with an airconditioner”