Oops! Nelson Mandela leaves half of his $4.1m estate to 3rd wife & nothing to Winnie Mandela

Posted by ayeesha, on February 4, 2014
1
Nelson Mandela’s ex-wife Winnie Madikizela-Mandela has been left out of his will, it has been revealed.
The former South African president has divided up his £2.5million estate between family members, staff and the ruling African National Congress.
However, he has chosen to give nothing to Ms Madikizela-Mandela – his second wife, with whom he had two daughters, Zenani and Zindziswa.
Meanwhile, his third wife, 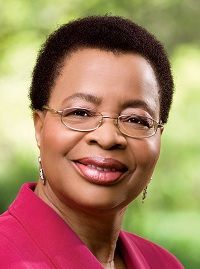 Graca Machel, has been named as the main beneficiary of the will because their marriage was ‘in community of property’, according to executor, Deputy Chief Justice Dikgang Moseneke.

She is therefore entitled to 50 per cent of his estate, which has been provisionally valued at 46 million rand (£2.5million), excluding royalties.But it is believed to have been accepted by his family with no contest so far.

As the main beneficiary, Ms Machel must claim her half of the estate within 90 days, said Moseneke, who was joined by executors George Bizos, a human rights lawyer who was a longtime friend of Mandela, and Themba Sangoni, a chief judge from the Eastern Cape province.
He added that although Madikizela-Mandela was not mentioned in the will, her grandchildren will each receive $9,000 (£5,500).
Full details of the will
–Wife Graca Machel, who is entitled to 50 percent of his estate, worth at least $4.1 million. She is likely to waive that right in favour of receiving four properties in Mozambique, cars, art work, jewellery and other assets.
-Mandela’s children each get around $300,000, or if they borrowed that amount from him during his lifetime, have their debts annulled.
-Ms Machel’s children, Josina Machel and Malengane Machel, each get around $270,000.
-Mandela’s four grandchildren via late son Makgatho will each receive $300,000 and will have the use of his home in Houghton, Johannesburg.
-The African National Congress (ANC), gets between 10 to 30 percent of royalties from his various projects.
-Mandela’s home in his boyhood village of Qunu will be made available to the Mandela family, as well as widow Ms Machel and her two children.=Grandchildren from his first marriage to Evelyn Mase and second marriage to Winnie Madikizela-Mandela each get $9,000. It was not immediately clear if anything had been bequeathed to Winnie.
-Staff members, including long time personal assistance Zelda la Grange, get $4,500 each.
-Schools and universities he attended and shaped his political life were each granted $9,000.
Dailymail
Tweet