Not long ago, Theresa launched her fashion label in Ghana, with Elikem modelling her creations at the launch. He also brought his girlfriend Pokello as a celebrity guest  model for the fashion launch.

According to Graphic Showbiz, Theresa said ‘I am two weeks pregnant for Elikem. We fell in love the very first day I met him at the launch of my clothing line of which he was part of the models, we exchanged numbers and we started a relationship from there. It is barely a month since we got to know each other but anyone who has seen us together would think we have been dating for more than two years, simply because we click.’

Ex-BBA housemates Elikem and Pokello Nare, who have been dating from the onset of the reality show in 2013, have laughed off the claims. They say their love is waxing stronger regardless of break up rumours. 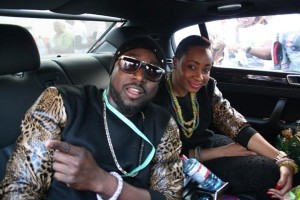 ‘Good morning my people. They have started again. Let’s burn these Motherfuckers. I am not with Theresa Onnen, Pokello and I are still happily together. This shit is insane. What has Polikem done to these people? I love my wife. Period,’ he said.

‘Elikem breaks up with Pokello; impregnates German-based designer hahahhaha. Polikem is a mother fucken Brand. When we break up we will inform u, not the other way round! Good day,’ Pokelo added.